To provide for a safe use of the track, below you will find various safety features, such as end stop tracks and buffers, as well as walkways. 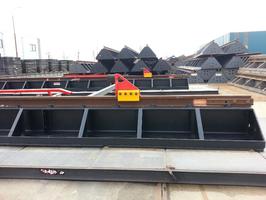 The application of end stop tracks and buffers is a safety device required when using a crane track. The buffer should be placed 2 metres before the end of the rail. End stop tracks should be placed in such a way that the crane comes to a standstill 1.5m before the buffer.
The buffers are designed in such a way that they first deform (crush zone) and then slide to the end of the crane track at which point a braking force will be applied. At the end of the rail track, sufficient connecting plates/weld plates should be mounted for the buffers to push against. 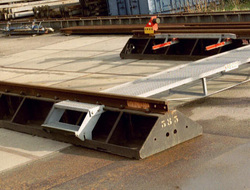 This walkway is designed to cross the track safely and easily. The use of the walkway reduces the risk of injuries from falls significantly.

The walkway is suitable for a track with dimension of 6 m and is used in combination with steps on each side.